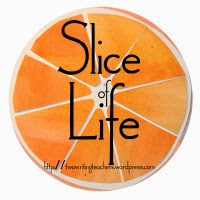 A week ago I had more anxiety than I knew what to do with. I was going to be going on a plane for the first time ever, navigating an airport for the first time ever and attending/presenting at NCTE for the first time ever. It was a bit overwhelming. I wasn't too worried about the presentation, but excited. I was, however, terrified of flying. I knew it would be better than I expected. Boy was I right! Airports have this thing down to a science. I was able to figure it all out with the help of very nice people. I got on the plane and felt calm. Sitting near the window I wondered how that would go, seeing everything. We were delayed! Really delayed. There was snow and ice on the plane and four people had to leave because the plane was too heavy. Oh boy! I was amazed that people actually volunteered to leave. They de-iced the plane twice and then it sounded like we were ready. I was ready. I sat there ready to brace myself and then we started to take off. It was exciting! I looked out the window at the blowing snow wondering if we would get above it. Slowly we went higher and higher. All I could think was, "I'm in the air!" I may have even said it out loud. Because of the delay I was going to have to really truck to my next plane to make it on time. We landed, I got my bag and ran. I ran and ran and ran through the Detroit Metro Airport. It was almost a mile of running. I found the gate and was amazed to see a short line still waiting to board. Lucky me they were running a bit behind. I was out of breath and sweating, hands trembling, but I had made it. Once again in the air, there wasn't a flake in the sky and we were up without a problem. As we got closer to Washington D.C., my destination, I saw all the monuments. It was amazing. I was also reminded what autumn is suppose to look like. We landed and I was elated and relieved. Found my bag in baggage claim without missing a beat and boarded my shuttle to the hotel. What an amazing experience. I was so proud of myself for doing something completely out of my comfort zone.
Posted by Betsy Hubbard at 5:16 PM 11 comments:

The Magic of Silver

I remember the day. I got my first set of 64 crayola crayons. I remember looking over all the colors and being in awe of the silver and gold.
Today I had a student ask me for a gray. Needless to say, I couldn't find one anywhere. I do have a stash of a few silver and gold crayons tucked away in one of my cupboards, so I brought out a silver. You should have seen the sparkle in his eyes.
"A silver? Gage, Gage, we've got a silver!?"

This week my student teacher is taking the week for teaching. She has made great progress and handing over the reigns, though difficult, has been wonderful. I have been getting caught up on so many things, one being the heaping piles following the aftermath of report cards from last week. After today I was doing a happy dance at all that I had accomplished. Got some assessment done to recheck a few things. Made some books for my students. Created a new chart for our stations that should help things go much smoother. Re-configured my schedule to adjust to a new schedule for our para-professional staff. They are taking away support time from my classroom, but a new schedule should help. I even got intervention plans done for several weeks. I am hoping they will get me all the way to winter break. I am feeling good, relieved and a little guilty. Why the guilt? Well, I know a lot of teachers who would love a week to do what I am doing. I wish it was possible to give teachers a break just to get ahead and get organized when it begins to all get overwhelming.
Posted by Betsy Hubbard at 6:10 PM 7 comments:


I voted today. I voted late, but I made sure I got there before it closed. My kids were interested in the process. I explained it as best I could. Maybe next time I will bring them with me. It's important to show our little ones the importance of this right. I hope they will mark their minds when the time comes.